A week with classic cars 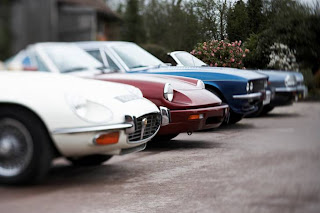 It has been a funny old week. At Great Escape Classic Car Hire we've had an unseasonaly hectic period with lots of car hire activity in the run up to Santa's busiest day. Cars out, weddings and 2010 bookings. It's given me the chance to test some of our cars back to back in some pretty tough conditions. Driving the Mazda MX5, Aston Martin DB6, Jensen Interceptor, Jaguar Mk2, Jaguar XJR and Porsche 928 back to back has been great fun and taught me a few lessons about classic cars old and new. So here goes:

1. Truck drivers hate Aston Martins of any age - maybe it's something to do with James Bond

2. The Mazda MX5 is the perfect all weather, all year classic car - it's popular because this car really is that good

3. Classic car heaters are programmed to pack up in December

4. Batteries will perform faultlessly for 364 days of the year until the first really cold day arrives and then they commit suicide

5. The Jaguar XJR has four massive fuse boxes dotted around the car in the most unlikely and awkward places (see 4)

6. Driving up the M40 in a Jensen convoy is an effective but expensive way to warm the immediate environment and defrost the road for other road users

7. The Jaguar Mk2 is a great trooper - always ready, always starts even 45 years after it was built

Having sampled all these different cars over 1000 miles this week in snow, rain, sleet and ice the car I'd jump into again first? It's not that easy but it would have to be the Porsche or MX5. Which is a pretty ringing endorsement of the remarkable little Japanese sportscar.

How great was the Alfasud? 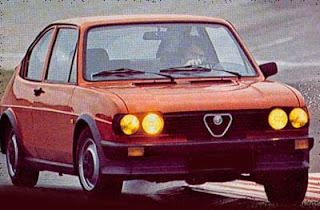 Some cars are born to greatness, some have greatness thrust upon them, some just rust. So it was with the Alfa Romeo Alfasud. If ever a car encapsulated the very idea of an own goal it has to be Alfa Romeo's baby family car of the 1970s. Here was a brilliantly designed and executed car that out-performed its competitors on every level and yet somehow succeeded in bringing a once great car maker to its knees for the next 20 years.
The story of the Alfa Romeo Alfasud brings together engineering wizardy and political incompetence. in the late 1960s Alfa Romeo was owned by the Italian government - not exactly world renowned as masters of efficiency and focus - but was a low volume manufacturer of expensive cars. This didn't exactly suit the government who wanted to create employment and cars for the masses. So they hatched a plan to create a low price, mass market family car with the evocative Alfa Romeo badge on its nose. This ostensibly simple and wise plan hit a stumbling block when the government chose a factory outside Naples to build it.
To those familiar with the Hillman Imp, Triumph TR7 and DeLorean DMC12 it may seem as if European governments in the 1970s were following some sort of strange ideology that required them to make unskilled workforces build cars in depressed areas of high unemployment. Because like Hillman in Glasgow, Triumph in Speke and DeLorean in Belfast, Alfa Romeo was forced to make cars in a run down area using people who had never made cars before. To compound the problem, the Italian government struck a deal with Russia to buy vast quantities of recycled steel.
Into this less than promising mix, Alfa Romeo threw possibly its best ever car design. Conceived by Rudolph Hurska, who had worked with Porsche, the Alfa Romeo Alfasud was a masterpiece of packaging and engineering. Under a body designed by Guigaro - one of his first independent commissions - was a spacious four seater car powered by a new Boxer engine and with exemplary ride and front wheel drive handling. The Alfasud was simply brilliant. It set new standards for ride, handling and packaging in its class, all at a price that undercut its European rivals. The Alfasud invented the sporting small family car before the term 'hot hatch' was coined and was arguably a better overall package than the Volkswagen Golf.
And yet, success was tantalisingly out of reach. The Alfasud failed for the company that made it and for the people that bought it. For Alfa Romeo, the new highly automated factory manned by car manufacturing virgins could never reach the required productivity levels that would have made the Alfasud profitable. Meanwhile customers could hardly believe that the brand new Alfasud they had bought six months previously was bubbling with rust.
The Alfasud could rust and certainly did. Stories of brand new cars leaving the showroom with rust are common. The poor quality Russian steel was the root cause, although Alfa Romeo's decision to inject foam into the bodywork cavities didn't help. The foam quickly got wet and the cars simply rusted from the inside out.
Alfa Romeo worked hard to eradicate the problems, albeit in a distinctly latinate way. Although they improved quality it wasn't quick enough and they kept using Russian steel long after the problem was known. The company addressed the productivity problem by pushing the Alfasud upmarket so that each car was more profitable, meaning fewer cars had to be made to hit their targets. By the time the last cars were leaving the production line in the mid 1980s the car was equal in quality to most European cars of the time and well protected against rust. But by then the legacy for quality and rust problems was well entrenched and it has taken Alfa Romeo until now to begin to reclaim its image. Producing shoddy cars like the 33 and Alfetta didn't help - starved of development funds, these cars were simply reworked older cars that struggled to survive in a market that had moved on considerably since the 1970s.
At Great Escape Classic Car Hire we have always loved Alfa Romeos - we have an Alfa Romeo Spider for hire - and we have harboured a soft spot for the Alfa Romeo Alfasud having owned several. Now we've just bought a beautiful 1983 Alfasud 1.5 Ti Green Cloverleaf that we are considering putting onto our classic car hire fleet. It is in excellent condition and has only covered 37,000 miles. The Green Cloverleaf Alfasud was the ultimate iteration of this wonderful little car and features a twin carb 105 bhp version of the 1.5 litre Boxer engine. It has taken us three years to find a decent Alfasud Green Cloverleaf because there are so few around. According to the Alfa Owner website - which we highly recommend - there are only about 65 Alfasuds left on the road. 10 years ago there were about 250. So this is now a very rare car indeed.
The Alfasud deserves much more recognition and praise than it has had so far. While the VW Golf GTI Mk1 has become a motoring icon that has cast a long shadow cast, the Alfasud is virtually forgotten. And yet here was a car that invented the sporting small family saloon and arguably created the mass market presence that has been essential to Alfa Romeo's recent success. It may also have created a legacy of poor quality and rust but beneath those problems it was a remarkable little car.
So now we're trying to decide whether to add this car to our classic car hire fleet or keep it for ourselves. Let us know what you think by calling 01527 893733, emailing info@greatescapecars.co.uk or visiting http://www.greatescapecars.co.uk/.

Vote for the Jaguar XJ6 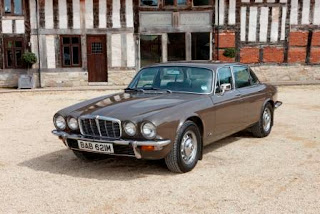 The Jaguar XJ6 is one of the greatest saloon cars ever made and it is now about to receive the recognition it deserves. The Great Escape Classic Car Hire Jaguar XJ6 saloon could be named as AROnline's Car of the Year by visitors to the influential British motoring forum. The 1974 4.2 litre Jaguar saloon in Sable with green leather was previously selected as a Car of the Month by the magazine and is now up for the annual prize against 11 other cars.
AROnline is a highly popular resource for fans of British classic cars. Visitors have the opportunity to select their Car of the Year from the 12 Car of the Month winners. The All-British cars competing alongside the Jaguar XJ6 include a Rover 2300, Vauxhall Chevette, Mini, Austin 1300 and MGF. To vote for the Jaguar XJ6 click here.
"The Jaguar XJ6 is a fantastic car and it is great that it is getting this kind of recognition," says Graham Eason of Great Escape. "Our car is a very low mileage car and finished in a rare colour combination.
"The Jaguar XJ6 is one of the most beautiful saloon cars ever made and the ride and handling are superlative for such an old design."
Great Escape Classic Car Hire operates from bases in Suffolk, Cotswolds and Dorset and operates a fleet of 40 classic cars from the 1950s to 1990s Every car is available for self drive rental by the day, weekend or week. Prices start at £125.
at December 08, 2009 No comments: