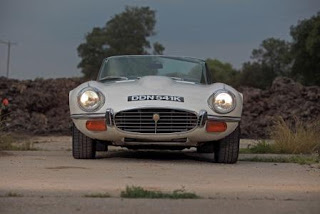 Die-hard classic car enthusiasts can be a funny bunch. If you just love old cars but don't know your Mk2.6 from your Mk2.5 then you can feel somewhat left out. No car quite typifies this obsession with detail more than the rather beautiful Jaguar E Type.  If you just love the E Type then you might find the talk of Series 1, 1.5 and so on all rather confusing, not to say a little alarming. Don't worry, help is at hand.
If you like E Types but don't want to look out of place in the snug of the Dog & Duck when talk, as it inevitably does, turns to classic Jaguars, here is the Great Escape Classic Car Hire handy guide to Jaguar E Types. We promise to bring you further articles demystifying the crazy world of classics one crock at a time.  Maybe one day, after a long lie down, we'll produce the Wartburg guide. Until then, the E Type..

Jaguar introduced the E Type in 1961 and carried on making it until 1975 when it bowed out in favour of the XJS. In that time there were three body styles - coupe, 2+2 and convertible. The 2+2 borrowed the coupe shape with an extra 4 inches in the wheelbase and a few inches of extra headroom. 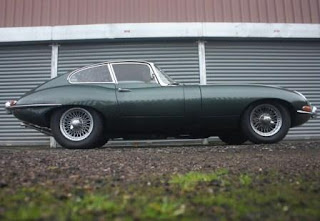 The E Type was rushed into production as a coupe or convertible with cowled headlights and attractive small rear lights.  Initially it came with a 3.8 litre version of the XK engine matched to the venerable 'Moss' box, a robust but rather prosaic gearbox that didn't quite match the E Type's sporting pretensions. In late 1964 Jaguar fitted the enlarged 4.2 litre version of the XK engine and the later synchromesh four speed gearbox.  Although power remained largely the same the extra cubic inches improved the car's torque and the gearbox was a dramatic improvement over the earlier Moss box.  In 1966 the 2+2 came along in a bid to widen the E Type's appeal and perhaps make it easier to get in and out of for Americans. The rear seat was largely pointless as there was zero legroom but the extra length and height did make the car more suitable for bigger drivers. The Series 1 is generally seen as the ultimate E Type, but if you know you're onions then there are considerable benefits offered by the later models.

In 1968 Jaguar responded to changing US safety legislation by creating what has retrospectively become known as the Series 1.5. This car was essentially a Series 1 but with raised, open headlights and an upgraded dashboard using switches rather than toggles. This car lasted until 1968 in the three body styles. 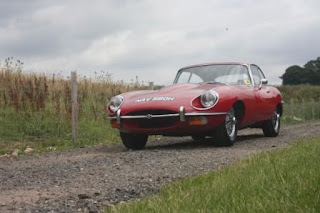 The Series 2 was launched in 1968 and lasted two years until the introduction of the revamped Series 3 in 1970.  It was a more marked departure from the Series 1 than the Series 1.5 because it had a significantly more comfortable interior, with new seats, and various external changes.  These included a wrap-around rear bumper with bigger lights below, larger front indicator lights and a larger front 'mouth' for better cooling. Some of the changes, in particular the rear lights, look a little clumsy compared to the early cars but overall the Series 2 is an improvement on the early cars in terms of comfort and reliability. 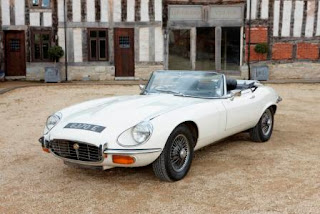 Purists tend to scoff at the final Series 3 E Type because it gained flared arches and uses the longer, less elegant 2+2 chassis for the convertible and coupe models. However the upside was the introduction of the wondrous 5.3 litre V12 engine, a silky smooth powerplant that gives the E Type effortless GT performance. The Series 3 was pitched as a more luxurious GT car with power steering and an automatic gearbox option.  The V12 offers similar performance to the straight six engined cars but delivers its power in a very different way. The longer chassis of Series 3 cars tends to mean they handle less well, being more of a grand tourer than a sports car like the early E Types. But a well sorted Series 3 in a good colour remains an attractive, butch alternative to the more delicate early cars.

Which is best?
Jaguar did a great job of keeping the E Type relevant for 14 years but there is no doubt that by the final years the youthful rebel had become something of an aging rocker. However, the story is not as simple as 'first is best.' Undoubtedly the first E Types with their tiny rear lights and cowled lamps look the best, but they cost a fortune as a result.  The Series 2 cars are more comfortable and more useable and, unless you put a Series 1 and 2 side by side, few people are now aware of the differences - it's just a beautiful car.  Series 3 cars lag behind in terms of value but there is no doubt that they're generally better built and the V12 engine is a treat that every petrolhead should try. Some even favour the more aggressive, purposeful stance of the final cars.

Whichever model you choose, choose wisely.  The coupe drives better than the convertible thanks to the additional strengthening but the standard chassis hard top does have small doors that can make entering and exiting the car inelegant. While the 2+2 solves this problem with extra headroom and bigger doors the Series 1, 1.5 and 2 versions of this body look very ungainly.  Only with the Series 3 hardtop did the 2+2 shape begin to make sense.  And yet it is the V12 coupe (using the 2+2 shape and chassis) that is currently the cheapest E Type you can buy.

At Great Escape we have experience of hiring every different version of the E Type from Series 1 to Series 3 in coupe, 2+2 and convertible styles.  Our current fleet includes 5 E Types from Series 1 to Series 3 in coupe or convertible styles, and they can be hired at our Cotswolds, Yorkshire or Devon sites.  We love the original Series 1 4.2 best but from the driver's seat and with a long trip ahead it would be our venerable Series 2 4.2 coupe every time.  For our customers they are generally just happy to be driving an E Type. To find out more visit http://www.greatescapecars.co.uk or call 01527 893733.  E Type hire now starts from just £249 for 24 hrs.