How to dodge the avenger

The Avenger is quite a good name for a car, up there with Interceptor and Mustang. Yet it hasn't, so far, adorned anything on four wheels worthy of the name. I know this because I've just spent a week and 1,000 miles with a Dodge Avenger driving from San Francisco to Seattle on a variety of roads.
The Avenger, of course, was a dismal also-ran family saloon built in Britain and variously badged a Hillman, Chrysler and a Talbot. Hardly names to strike passion in the hearts of family men up and down Britain. Back when it was new the Rootes Group made BL look like a model of efficiency. Such was the Coventry conglomerate's commitment to producing second class tat that even when it had the right idea, the Hillman Imp, it got it all woefully wrong in the execution.
Step forward the Avenger Mark 1. Here was a reasonably designed four door saloon that owed more than a nod to the Mark 2 Ford Cortina with the stylish kink over its rear wheels and the curving rear screen and boot line. It was competent in almost all respects except that a car badged 'Hillman' was about as sexy and desirable as the plague. Hence the rebadge as Chrysler - which nobody had heard of or cared about - and then Talbot, a once proud British marque reduced to turning out ancient tinny fayre like the Alpine, Horizon and, lest we forget, the Tagora.
So I didn't approach the Dodge Avenger with any great expectations. Which is just as well - what you don't expect can't disappoint you. We collected the Avenger in San Francisco and were immediately taken with the fact that it was red. Mainly because it was Very Red Indeed. Alamo cleverly hid the Dodge in a dark underground car park so it was a few minutes before we took it out into the autumn California sunshine and realised that this was, quite possibly, the reddest thing ever produced by man.
Dodge, so far, hasn't made many inroads into the UK market so its roster of boxy saloons and hatchbacks are not familiar sights. Probably just as well because at least in the case of the Avenger, ugly is a stick it knows only too well. The larger Charger and Challenger models look quite good, in coupe, saloon and estate versions, but Dodge's butch design language doesn't work on a smaller scale. Amusingly the Avenger has a similar kink over the rear wheels as the original Hillman, although I suspect that is a retro homage to the Dodge Charger made famous by Luke & Bo Duke rather than a nod to the heinous Hillman. The Avenger is clearly meant to look butch and sporting but, particularly when sporting steel rims, just ends up feeling a bit silly. Rootes Group aficionados may recall the Chryslyer/Talbot Horizon, a Golf-wannabe from the late 70s that had massive flared arches covering tiny narrow wheels. Well the Avenger continues that vibe.
On the road little improves. Dodge is apparently America's fastest growing car brand, something it has achieved through improved design and interior fit and finish. The car is competently built in the way any modern car is but it hardly feels premium. The dashboard was obviously designed with a brief including the word 'sporty' in capital letters and looks ok. But elsewhere in the cabin the idea of sewing - yes, sewing - two pieces of hard plastic together using sporty (presumably) white thread and pretending its leather was never going to fly like an eagle. The Dodge suffers from direct but dead steering and a particularly ancient and asthmatic 2.4 litre 4 cylinder petrol engine. This is mated to one of the worst automatic gearboxes in the history of assisted gearchanging - it is forever hunting between its four widely spaced ratios. Factor in uncomfortable seats and a ride that is only at home on a billiard board and you have a very disappointing car indeed. Oh, and it struggles to top 27mpg, even with motorway driving. Gas may be £ 2.50 a gallon in the land of the free but that's still a poor show.
All of which is a shame really because I was looking forward to spending some time behind the wheel of a modern car. The newest car in our household is a 2005 Mercedes. Most of my time is spent either piloting 60s classics or driving a soggy 2001 Saab. Believe it or not, the idea of a car with air con, cruise control and the opportunity to talk to my passenger without being drowned out by various creaks and groans was quite appealing. But after sampling the Dodge I came away wondering whether I really wanted that at all. Because dismal as the Hillman Avenger was it did have character. You could drive it hard because it told you what it was doing. The same couldn't be said of its modern namesake. And perhaps that is the story with many modern cars.
As cars get cleverer and the driving experience easier and more remote I hope there will still be a place for the stuff we like at Great Escape - cars that are engaging and entertaining, not because they've been designed by marketing people to make them like that but because they just are.
To find out more about our growing fleet of classic cars for hire as well as our driving day packages, visit http://www.greatescapecars.co.uk or call 01527 893733. 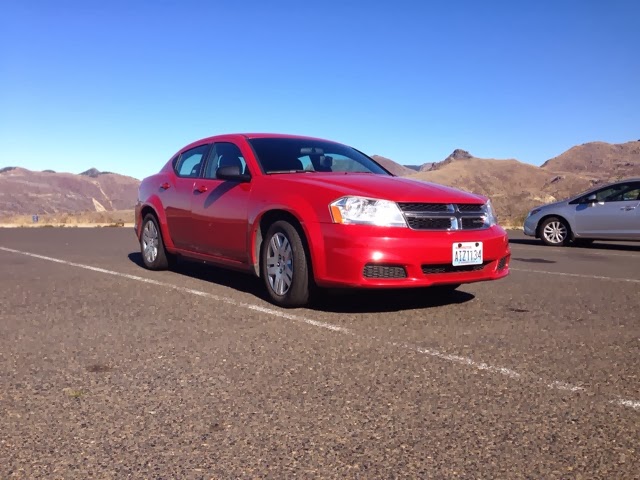