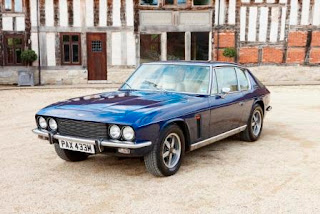 The Jensen Interceptor is one of those classic cars that has most enthusiasts reaching for the smelling salts.  Which is understandably, because the car has a reputation for unreliability and complexity, so restoring one is not necessarily for the faint hearted.
We don't claim to be Jensen specialists but we do have a lot of experience with them: we have run several on hire since 2007, including one car continuously over that time.
This car, which is one of the last 'J-Series' models with the 7.2 litre V8 engine, has been known to us for many years.  The car was on hire with us between 2012 and 2015.  The car was taken off the road for restoration this year. 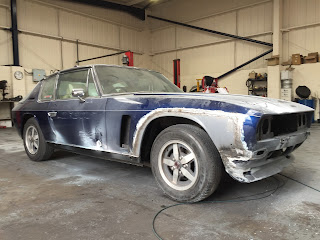 Despite a long list of repairs by marque specialists, this Jensen needed a considerable amount of work when it was taken off the road. This is fairly typical of the Interceptor: it is a complicated, hand-built car with a huge number of rust traps and hidden crevices. Consequently keeping it in A1 condition is a little like painting the Forth Road Bridge.
The car was mechanically fine but needed repairs to the front wings, bonnet and rear wheelarches, where rot had taken hold.  Once done the car will receive a full respray in the original Royal Blue.

Click on the links below to read the updates on this car's progress through the workshop.