The Great MOT Stitch Up 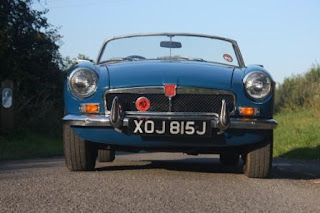 You may have heard that the Government is proposing to extend the current MOT exemption scheme.  But you probably haven't.  Because it's not exactly been highly publicised.
On September 22nd the Department of Transport announced that it was considering extending the current exemption for cars made before 1960 to most cars made more than 40 years ago, with an option to reduce this to 30 years.  This was in response to the EU Directive on Roadworthiness. The 'consultation' process' closed on 22nd November.

The Federation of British Historic Vehicle Clubs knew nothing of the proposal in advance, which raises a few questions about the DoT's general market engagement as well as the FBHVC lobbying skills. And its relationship with the Parliamentary Historic Vehicles Group, which supposedly represents the Federation and lobbied early on for the original 1960 exemption. But is nowhere to be seen this time around...
Irrespective, it caught the Federation off guard, the timing preventing it publicising the proposal through its quarterly newsletter and limiting its engagement with its members, the classic and vintage car clubs of Britain.  Namely, classic car enthusiasts.
If you weren't aware of the proposal then you may be aware that the UK is planning to leave the EU. And so you may wonder why the DoT is responding to an EU Directive that won't matter a jot in a year or so.

The EU
According to the DoT because Britain is currently a member of the EU it has an obligation to respond to legislation, even if it won't apply in the long term.  And perhaps that's true.  Another way of looking at it might be to suggest that the DoT seems the exemption as a convenient way to save money and is using the legislation to deliver that objective.
Save money, how? The idea behind the roll back of the MOT is that training MOT testers and updating MOT testing procedures to accommodate older cars will be expensive and complex. It might place an undue burden on MOT testers, potentially leading to the network contracting. Against that backdrop reducing the scope of cars covered by the MOT makes a sort of sense.
It doesn't, I suggest, make any sort of sense against any other backdrop.  Which makes the Federation's support all the harder to understand. The Club supported the original rollback, arguing that it was less risky than the alternative, which was that old cars could have been taken off the road UIKeyInputDownArrowby legislation.  This pragmatism was bolstered by the suggestion that old car owners are fastidious, so  will address any known faults, and don't use their cars much, so the risk is minimal.

White Flag
This may be 'real world' to some but is the argument equivalent of waving a white flag. It's also misguided - only 10% of pre-1960s cars are submitted for the voluntary test, which means 90% of owners have no annual independent assessment of their car's condition.
The classic car scene in Britain is big - there are lots of owners, they all vote and lots of companies depend on their enthusiasm. When the original proposal to create an exemption was muted, the Federation could have formed a decent argument that this was dangerous and dredged up facts and figures from its regular industry survey to justify the economic argument. It didn't do any of that.
This time around the Federation has capitulated again, arguing that a limited consultation with its members indicates that pragmatism is the best game to play. It argues that there is no 'valid test' to demonstrate the safety risk of untested cars. If, as this suggests, there is no demonstrable link between MOT tests and safety, why are we bothering to test any cars? It makes a nonsense of a self evident truth.
My view, and that of many others, is that no car should be exempt from an annual independent test of roadworthiness.  The reasons are simple: not every car owner has the equipment or knowledge to assess how safe their car really is. Even those that do, I would argue, may choose not to do the work if it isn't legally required.
I do understand the DoT's economic challenges.  But the solution is not exemption. A two-tier test for pre and post-70s cars would enable the test for modern cars to move forward but provide a more suitable test for older cars. This could even be managed by a separate, dedicated test network. If the alternative is removing classic cars from the road then owners and the industry would surely suppport it.


I am very worried about the Goverment's latest proposal and in particular how it has interpreted 'democracy.' As with the original exemption there appears to have been a deliberate attempt to limit the scope of the 'consultation.' I can still recall attempting to engage with the Parliamentary Historic Vehicles Group back then and being rudely rebuffed.
It looks very likely that the exemption will rollback to at least 40 year old cars and probably 30 year old cars.  It needs to be emphasised that if we're leaving the EU there is no need to do this.  But if we do then I urge anyone who owns a car in these categories to put their car through the voluntary annual inspection.  Without an independent inspection you cannot be sure that your car is safe and roadworthy.  If you are involved in an accident, that reassurance could be very important to you.

At Great Escape Cars we will continue to test our cars annually, irrespective of what the Government decides to do. UIKEYINPUTUPARROW
_______________________