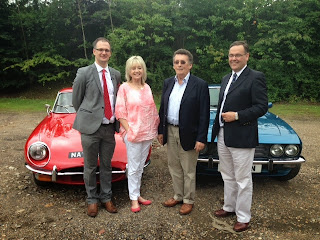 After seven years loyal service we've called time on our involvement with the BBC's popular Antiques Road Trip and Celebrity Antiques Road Trip programmes.  At Great Escape Cars we have been involved from the first episode in March 2010 and, with a break of one year, continuously until summer 2017.  Since 2012 we've been the exclusive supplier to the series.

So why stop now?  Put simply, we don't need the work or the hassle.  The job of supply 50 classic cars annually to this popular programme comes fraught with issues.  Most of those cars are sourced from private owners - over time we've worked with several hundred of them and met some lovely people.  And, sadly, some less lovely people.  Perhaps the less said about that the better.

Filming for these programmes has taken us all over the place and put us behind the wheel of some amazing cars.  We've met some great people and witnessed some brilliant telly in the making.  We've also honed our logistics and administration skills, managing the supply of multiple cars for concurrent film shoots throughout Britain.  But the risks associated with supplying private cars for filming, at extremely tight margins, became too great to justify.

Filming is also a young person's game - you're away from home for long periods and long days and that just doesn't suit many of the people who work for us.  Managing classic cars during filming requires experience of these cars - and generally that requires older staff with families and responsibilities.

During the last two years we have also been juggling resource around a hectic hire season and busy corporate events schedule, which has put the team here under immense pressure.  When you've got more lucrative ways to earn money, eventually you have to put profit above pleasure.  So we're out.

These two programmes are made by a fantastic team of crew and antiques experts on location who work exceptionally hard to often crazy schedules. Filming has taken us all over the country and put us behind the wheel of some great cars.  There have been many highlights.  It's been fun but I'm not sure many of us here would want to do it again.