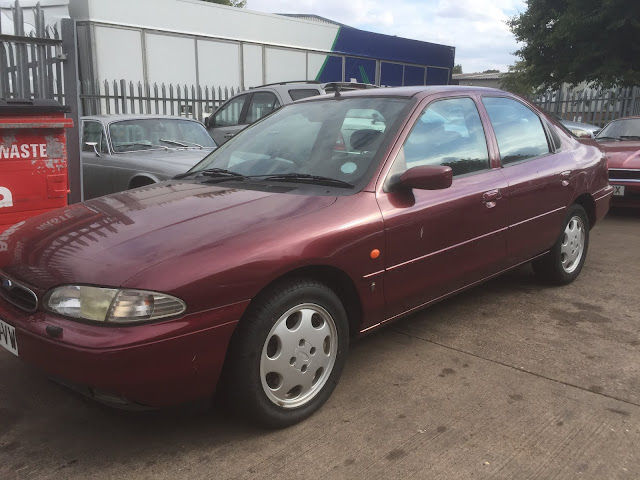 The words 'cheap' and 'Mondeo' tend to go together like gin and tonic. But our latest Great Escape Cars workshop project was cheap even by Mondeo standards. £50 cheap. That's literally pie-and-pint-for-two motoring.
There are few rational reasons for buying an early, cheap £50 Mondeo, particularly when you already own an early, cheap Mondeo as I do. But for reasons of nostalgia and Because It Was There, I now own a manual 1994 Mk1 Mondeo v6 Ghia.  I also claim early adopter status - the first Mondeos are now 25 years old, so they're bonafide classics. Well, on paper at least.
There is some method to my madness, even £50 worth of madness. There are only a handful of early v6 Mondeos on the road and this particular car is one of the first registered in the UK. I also ran a Mk1 Ghia 2 litre as a company car for a while and have fond memories of it. That's the emotional stuff. In the realm of rational decision making, the early Mondeos were great steers, the v6 is a peach of an engine and £50 is a gift. 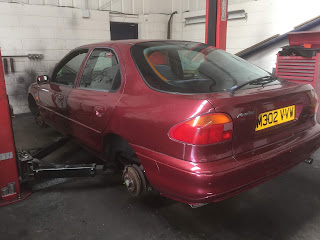 The justification is helped by the fact that this car is remarkably solid. It's a 2 owner car with 130,000 miles. The bodywork is 'virtually rust free' in the language of car adverts (i.e. Not rust free), but solid in the usual Mondeo rot spots around the sills and rear arches. The paintwork is a bit flakey and the doors seem to have been attacked by a plague of Tesco trolleys, but it's presentable.
The car failed its MOT in November 2017, since when it had been advertised on a classic car website at a gradually reducing price. It failed the MOT mainly on emissions - 'probably an easy, cheap fix' said the owner. But presumably not probably easy or cheap enough for him to bother fixing it himself. 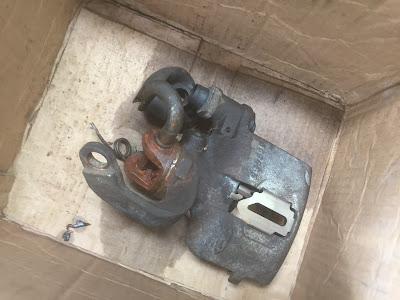 Collecting the car in June 2018 revealed some more detail about its history and that MOT fail. It turns out the seller didn't want to throw money he didn't have at the car. That he didn't have money quickly became evident from the car's service history, which was cloth of gold main dealer maintenance right up to 2006 and 110,000 miles when this chap bought it from a neighbour.


In the intervening 20,000 miles and 12 years it turns out the car had never been serviced because, in the never-to-be-forgotten words of the seller 'it never needed it.' And, in his defence, I suppose he was sort of right - it passed the annual MOT, it ran reliably, therefore it didn't need serviced. The facts, in a way, support him. 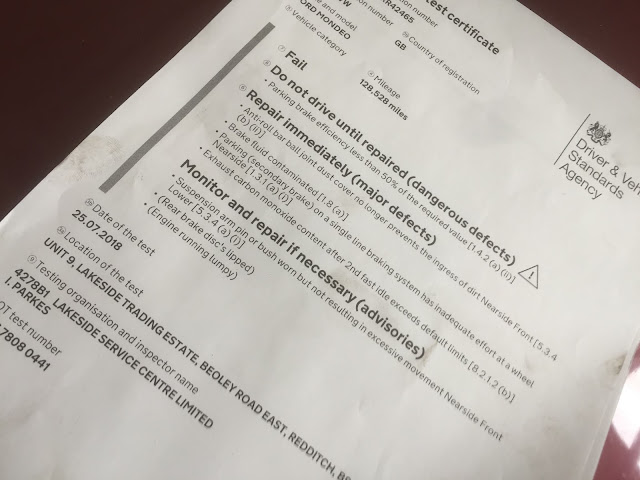 Except when it comes to that final 2017 MOT. I suspected that with fresh plugs the emissions would probably be cured and the other issues (brakes and handbrake) could be sorted fairly easily.
Back in Redditch our workshop took the car for MOT so that we had a base line to start from. Although the old MOT hinted at issues, a re-MOT would give us a firm position on current condition. It failed, inevitably, on emissions and handbrake.
New plugs have cured the misfire and, hopefully, the emissions. New rear calipers have sorted the handbrake problem. With these done the car will go for MOT in early August. 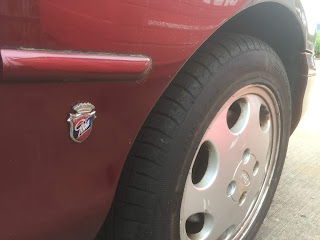 Meanwhile, I've been reacquainting myself with Mondeo Ghia life, albeit in a look-not-drive sense. Unlike modern Mondeo Ghias, the early ones inherited the generous approach to everyday luxury that characterised the Cortina and Sierra Ghias. These were cars for the masses to aspire to, models drizzled wth showroom tinsel to set them apart from humble versions. So this car's original owner got stylish teardrop alloys, thick velour seats, air con, sunroof and, of course, a rechargeable torch in the glovebox (sadly that's gone AWOL). Plus, to push the indulgence to 110, a wood-effect fascia. And it really is wood-effect. In the sense of faux wood designed by someone with no direct or recent experience of timber. Of course, I love it.
My colleagues, less so. The early Mondeo is still a very marmite car. Whereas older Fords like the Sierra, Capri and XR3, have been welcomed in from the cold and recognised as bonafide classics, the Mondeo is still in the old car hinterland. For most it's just a cheap smoker.
Yet there are signs of change. Over on Twitter and Facebook there is a surprising amount of love for these cars. Sure, nobody is going out to buy one, but the Mondeo's considerable abilities as a motorway cruiser and B-road driver are recognised.
I didn't buy this car for peer approval. Which is lucky, of course. And I can live with the jokes. But I am looking forward to getting it back on the road and giving it a new lease of life. I am extremely fortunate to own some nice cars but, in a way, this Mondeo is as interesting to me as an E Type or Jensen. Perhaps more so because it can be driven all the time without worrying about mileage or condition.
You can follow the recovery of this Mondeo here or on our Twitter feed @greatescapecars.