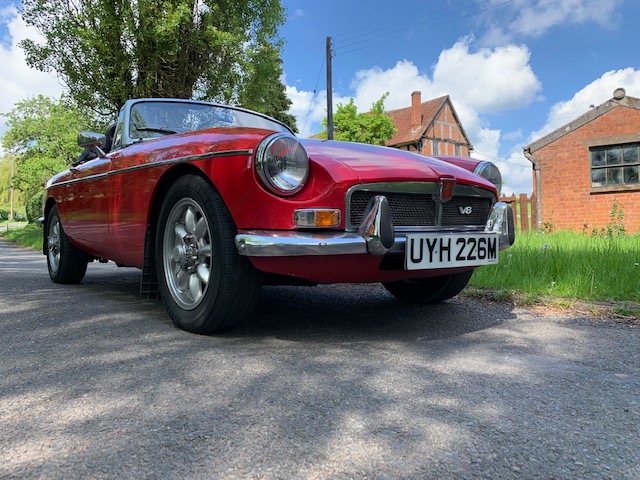 Few cars are more 'classic' than the venerable MGB.  It's to classic what gin is to tonic, the kind of car you can guarantee to find wherever two or more old car fans gather.

But its ubiquity is also its Achilles Heel.  We're so used to seeing MGBs that it's easy to forget why they're so popular. And, to be honest, driving a standard B can instill the same sense of wonder.

Lovely as the MGB is to look at and practical and simple as it is to live with, there is something fundamentally underwhelming about its driveability.  The 1800cc engine, which the B shared with a plethora of far more humble British Leyland and BMC offspring, is not exactly the last word in sporting power and sophistication. None of which detracts from the B's charm and relaxed demeanour.  But for those searching for a little more from their soft tops, the answer has traditionally lain elsewhere. 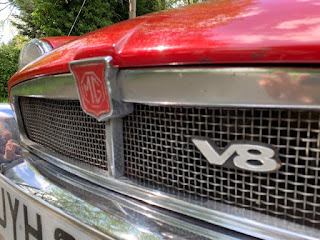 Until now.  Great Escape Cars has added a MGB roadster to its fleet and it comes with a twist.  When you approach the car, the clue is subtle - just a small V8 badge on the grille.

That subtlety ends when you start it up.  It's been retro-fitted with Rover's brilliant 3.5 litre V8.  And we've driven it.

Due to the arcane intricacies of British Leyland politics, MG only ever fitted the Rover V8 to the MGB GT, creating a budget E Type that sounded good and drove well. The reason, apparently, was to avoid the MGB competing with the Triumph Stag and, later, the still-born TR8. Of course, it wouldn't have done either - instead a V8 MGB roadster would have added new life to a creaking old design at a time when Abingdon needed all the extra volume it could get.

Driving the new addition shows just how blinkered this decision was.  Dropping the lightweight V8 into the MGB transfers the car from a car with sporting pretensions, into a proper, snorting sports car.  Where the Stag has GT pretensions and the TR8 aimed for the future, the V8 B is just a great traditional sports car. 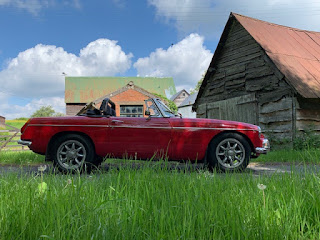 The Great Escape Cars MGB V8 has been professionally converted, and it shows - brakes, axle and gearbox are all uprated, the latter being the 5 speed box used in SD1s and XJ6s.  These details are important because I've driven other V8 MGB roadsters and been unimpressed.  Unless the right modifications are made, you've just got a MGB with more power.

I've never really been a big fan of the MGB roadster.  I like the BGT but the convertible has always felt too much of a compromise - a sports car that isn't sporting.

But this car challenges that immediately.  Turn the key and the V8 really does burst into life.  Instead of the low rumble you get from a V8 Rover SD1, here it's more like the sudden arrival of a plague of dogs.  It barks and spits, but in a nice way that suggests teeth but without actually revealing them. 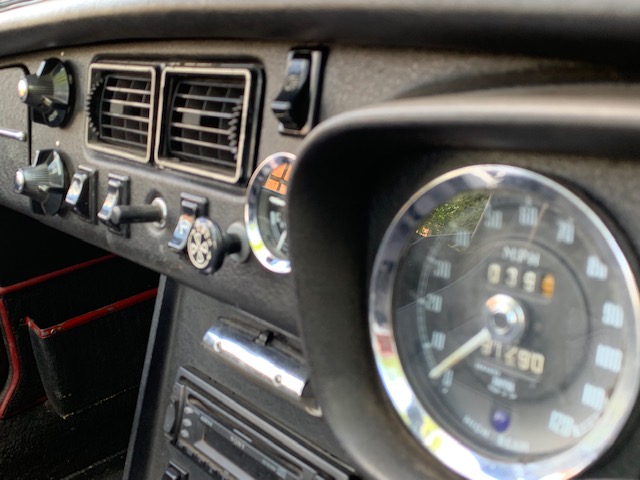 The rasping V8 Rover has always been one of the nicest sounding V8s around, and with this car's modified exhaust the car has a real sense of purpose that the normal B can't compete with.

On the road the initial impression is of standard B behaviour - the slightly wooden steering and knobbly ride persist, but as in the standard car, it's reassuring rather than offputting. This isn't a car that is going to catch you out or demand too much of your attention, traits that help explain why the MGB remains so popular.

The extra power isn't as immediately obvious as the engine's tractability.  The standard 1800 engine needs to be worked to gain progress, something that its labouring at high revs tends to discourage.  The V8 is entirely different - smooth, free-revving and, put simply, everything that the standard motor isn't.  Even with 170 bhp the V8 B isn't particularly quick - although it sounds scintillatingly fast - but the way it delivers that power is so much more enjoyable.  You won't get into much trouble with it but the simple act of accelerating and changing gear is transformed into something genuinely enjoyable.

You still have to plan ahead with a B though - the steering is direct but lacks feel and the handling is pretty rudimentary, but you don't drive a B for TVR-like responses.  Instead, with more power you can at least start to enjoy what it does deliver - it's solid and predictable through the turns, and sometimes that's just fine. 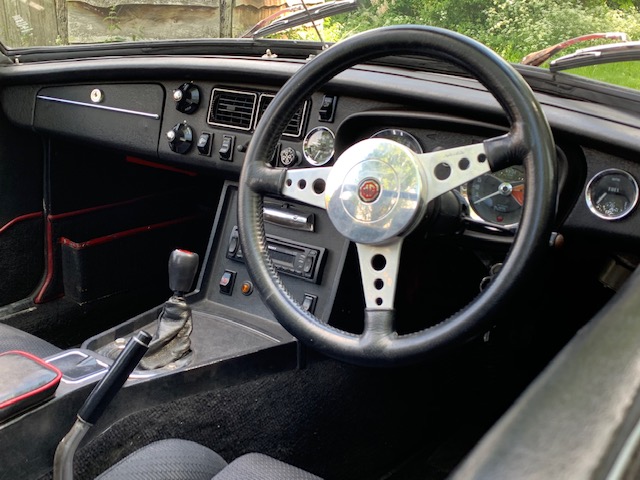 I've experienced the 5 speed Rover gearbox before and remember a notchy, vague change that prevented quick shifts.  The same box in this MGB feels different - there's more precision, a shorter throw and the five speed works well with the highly tractable Rover engine.

The changes under the skin thankfully don't detract from the familiar virtues of the MGB - it's practical, with big doors, spacious (this car has comfy MX5 seats that suit it) and with that lovely crackle finish dashboard so familiar to MG enthusiasts.  You also get the usual easy-to-operate hood and a fair size boot - although the spare wheel does take up most of it.

Classic British sports cars of the 1960s were never the last word in handling finesse.  An E Type was never a match for a 911 and the Austin Healey could be an effort on B roads.  But they did go well in a straight line.  Dropping a V8 into the MGB puts comfortably into that group.  It sounds great, it looks great and it goes fast enough to get the pulse racing.

The MGB should have had the V8 in both models when it was new.  That it didn't is one of British motoring's biggest failures because the engine transforms the car.  The Great Escape Cars' MGB V8 is now available to hire by the day or on one of the company's popular driving experiences - 60 minute Classic Tasters (from £39) or full and half day road trips (from £149).  Find out more at www.greatescapecars.co.uk or call 01527 893733. 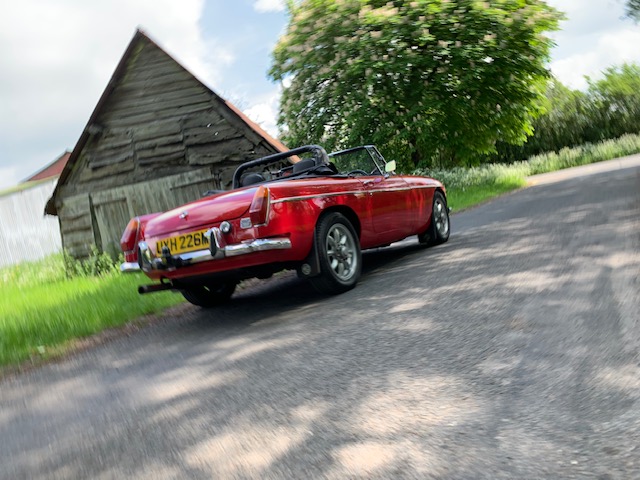